I was tagged by rural romance author Heather Garside to participate in the Meet My Character blog hop. Thanks, Heather, for inviting me.

Heather grew up on a cattle property in Central Queensland and now lives with her husband on a beef and grain farm in the same area. She has two adult children.

She has previously published three historical romances and has helped to write and produce several compilations of short stories and local histories. The Cornstalk was a finalist in the 2008 Booksellers’ Best Award, Long Historical category, for romance books published in the USA. Breakaway Creek was a finalist in the QWC/Hachette Manuscript Development Program and was released by Clan Destine Press in 2013. It is a rural romance with a dual timeline. Her recent release is Tracks of the Heart, a collection of three short stories.

Heather works part time at the local library, at home on the farm and helps produce a local monthly newsletter, amongst other voluntary activities. 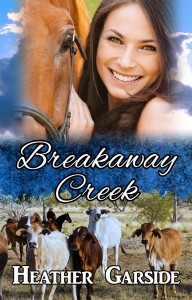 Now I’d like to introduce you to my main male character from my latest thriller, Grievous Harm, John Corey, through these blog hop questions.

It’s a contemporary story that starts in Brisbane, then goes to Sydney before moving to country New South Wales, back to Brisbane, then Outback Queensland. I love Australia and like to show the variety in our great country. And the plot takes the characters where they need to go.

Although he works for a covert agency that answers only to the Prime Minister and has to undertake assignments that force him to act in ways that he doesn’t always like, John has kept his sense of decency and moral compass. When he decides to help Kate find her missing niece, it is in defiance of his orders but he knows he can’t brush aside the fact that children are being violated and he is the only one in a position to find them.

Something happened in John’s past that has made him determined not to become emotionally involved with another woman, and it’s only when he’s faced with an impossible situation that he realises he loves Kate. The decision he has to make, while saving her from a horrific fate, also destroys the future he thought he could have with her.

To save the children who have been taken into an invidious cult.

This book is Grievous Harm and there’s an excerpt on my Books page.

It was published in October this year by Clan Destine Press and is available as both print and eBook.

I have tagged two authors who write in different genres, Nicole Hurley-Moore and Christine Gardner.

Nicole has always been a lover of fairy tales, history and romance. She grew up in Melbourne and Central Victoria and has travelled extensively. Her first passion in life has always been her family, but after studying and achieving her BA in History and Honours in Medieval Literature, she devoted her time to writing historical, fantasy and contemporary romance. She is a full time writer who lives in the Central Highlands of Victoria with her family, where they live in the peaceful surrounds of a semi-rural town. 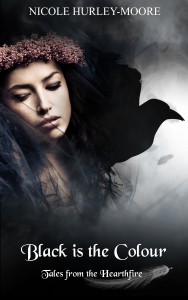 Ciana has loved Oran all her life and nothing, not even her father will prevent them from being together. But the Mayor of Stonemark has higher aspirations for his daughter than the village blacksmith. He engages the help of a witch and dark magic to bend Ciana to his will. Oran knows that he doesn’t deserve Ciana. But their love is stronger than the metal he forges and welds. She has his heart and he will never turn from her no matter the cost. They plan to run away and start a new life far beyond her father’s reach. But their escape comes too late. Separated, Ciana will need all her strength to journey through the deep forest and save Oran from the witch’s curse. Alone and with only a trail of black feathers to follow, Ciana will fight against the odds and attempt to bring her lover home.  Amazon link – http://goo.gl/f3juDg

Christine lives in regional Victoria, Australia, with her husband and a Siberian husky, Esky, the proud owner of the back yard. After a life-long love of reading and of history, she spent several years at both TAFE and university, studying everything from editing and professional writing to history and philosophy, eventually emerging with a Bachelor of Arts (Hons). Her studies led to the writing of a non-fiction book, ‘Not Guilty’ and the fiction version of the same story, ‘Her Flesh and Blood’. She has also written several novels for children and young adults and is now focused on fiction for adults. Her last novel was ‘Stony Creek’, a rural romance, and all her books are available on Amazon. 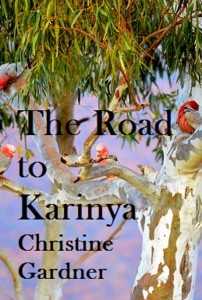 Prue King is nineteen and lives on Karinya Station, one of seven girls. She and her friend Sally decide to go on the adventure of a live time—a road trip, right around Australia. Neither Prue nor Sally is in any hurry to settle down, unlike some girls their age. They want to see the country and be independent. When they meet brothers Dan and Steve on the Sunshine Coast Prue is stunned by her feelings for him, but her plans remain the same. She and Sally are determined to get to Perth where they will live for at least a few months and decide what their futures hold. When the girls leave the brothers behind though, they experience something that will change their plans and their lives, perhaps forever.

Thanks, Nicole and Christine, for agreeing to be part of this blog hop.

It happened a while ago, but I thought I’d share with you. When I told my daughter that my sixth book was titled Fatal Flaw, she quickly came back with, “And I guess the sequel will be called Treacherous Tiles, or Lethal Linoleum, or …” You can probably gather from that that her mind works in a rather quirky way.

It set me thinking about book titles and how they can be interpreted by readers and whether they play a part in why a reader selects a book to peruse and perhaps to purchase. After my first book, Dance with the Devil, was published, I was shopping in Target and, naturally, checked out the book department. To my surprise, Dance with the Devil had been placed in the Horror/Supernatural section. Another surprise was that my friend Louise Cusack’s first book, Destiny of the Light, a fantasy, had been placed in the New Age section.

What had made the Target employee decide where to place the books? The title? The cover? As the cover of Dance with the Devil gave no indication that it had any horror or supernatural elements in it, I could only assume it was the title. And I’d thought Louise’s book looked like a fantasy.

So what makes you, as a reader, pick up a book? And does the title influence what you think the book might be about?

Sleep deprivation aside, the Romance Writers of Australia 2012 Conference at the Gold Coast was a fabulous time. With all the roadworks it took nearly seven hours to drive down, but all fatigue lifted at the sight of our fabulous accommodation at the Surfers Paradise Crown Towers Resort.

My daughter-in-law, Cherie (writing as Cheryse Durrant), and I were sharing with fantasy author Rowena Cory Daniells (who also writes paranormal crime for Clan Destine Press) and artist/writer Jacque Duffy. Clan Destine Press Publisher (and author), Lindy Cameron, took advantage of being in Brisbane for a few days to pop in for a visit. Apart from catching up with her CDP authors, Rowena and me, her ulterior motive was to surprise Cherie/Cheryse with a three-book contract for her fantasy Heart Hunter trilogy. This trilogy tells the story of Shahkara, half-Taloner, half-human, and all kick-arse heroine. “Demon Hunter”, book 1 in the series, will be launched in either April or May next year. As you can imagine, that led to much celebration, followed by lots of brainstorming on the best way to promote Cheryse’s forthcoming books. LJ Smith (Vampire Diaries) has read the first one and endorsed it: “SHAHKARA, the book, is unique, and Shahkara, the character, is one of the most engaging strong female role models I’ve seen in a long time. This girl can handle herself! The plot is full of ingenious twists, turns and surprises, and I look forward to reading the next book in the series.” 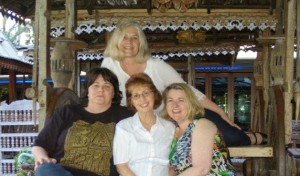 And if that wasn’t enough, Lindy’s other motive was to bring Rowena her first copies of “The Price of Fame“, her paranormal crime now out with Clan Destine Press.

And, yes, we did make it to the RWA conference, but that’s for the next blog 🙂