It happened a while ago, but I thought I’d share with you. When I told my daughter that my sixth book was titled Fatal Flaw, she quickly came back with, “And I guess the sequel will be called Treacherous Tiles, or Lethal Linoleum, or …” You can probably gather from that that her mind works in a rather quirky way.

It set me thinking about book titles and how they can be interpreted by readers and whether they play a part in why a reader selects a book to peruse and perhaps to purchase. After my first book, Dance with the Devil, was published, I was shopping in Target and, naturally, checked out the book department. To my surprise, Dance with the Devil had been placed in the Horror/Supernatural section. Another surprise was that my friend Louise Cusack’s first book, Destiny of the Light, a fantasy, had been placed in the New Age section.

What had made the Target employee decide where to place the books? The title? The cover? As the cover of Dance with the Devil gave no indication that it had any horror or supernatural elements in it, I could only assume it was the title. And I’d thought Louise’s book looked like a fantasy.

So what makes you, as a reader, pick up a book? And does the title influence what you think the book might be about?

Sometimes writers develop a fondness for a particular character they create, and in my short stories that character is Amy Dawson. She started out in a serial I wrote for Woman’s Day. The editor liked her story and a year later another of Amy’s adventures was published. It’s been a few years since then and when I re-read the first story with the aim of putting it on my website I wondered why I hadn’t written another story about this cop who attracts trouble faster than ants find left-over cat food. Guess that will have to go on my ‘to do’ list. I hope you enjoy her first story in my not-very-imaginatively-titled Short Stories section.

After a visit to the orthopaedic surgeon on Friday I am now splint-less. Unfortunately this doesn’t mean that the break has healed well or the arm is fully recovered – but if I don’t start moving it again the elbow and shoulder joint will freeze. So now I have little exercises to do like washing the knives and forks (I asked my husband if he’d phoned the doc and put him up to this, but he just laughed) but am not allowed to push, pull, pick up anything heavier than an empty cup etc, and to my dismay was told it will be six months before everything will be back to normal. I’m not good with inactivity, so will have to restrain myself from testing the boundaries of his orders.

Beautiful sunny weather today – might have to walk down to the bay near here and look at the ocean rolling in and smell the salt. I am such a coastal person! Love visiting the country, but this is where my heart lies. 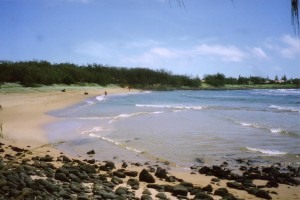