Brisbane writer Ian Walkley is one of the new generation of self-published novelists, with his debut novel, No Remorse, recently launched on Amazon and Smashwords. The non-stop action thriller, set in Europe and the Middle East, follows a former Army Special Operations commander on a personal mission to rescue a friend’s kidnapped daughter, only to discover a much bigger threat than he could possibly imagine.

With author JJ Cooper, who penned The Interrogator and Deadly Trust, describing No Remorse as “An edgy thriller that gets straight into the action and doesn’t let up, a plausible plot with a strong and engaging protagonist—intelligent thriller writing”, Ian looks set to establish himself as a thriller writer to watch out for.

Ian, your main character, Lee McCloud, is described as “a loose cannon” by his superior in the secret organisation which he is forced to join. Why do they believe this?
McCloud is a Delta Force special ops guy, trained for the toughest missions, deniable, highly intelligent, used to making quick decisions under extreme pressure. You can bet the bosses worry about whether someone like that can be controlled. Especially after McCloud leads a personal mission, unsanctioned, to rescue two kidnapped girls, which goes terribly wrong.

You have obviously done a lot of research to make sure all your scenes read as truly authentic. How much research did you do, and how did you go about this?
Writers are incredibly varied in how much research they do. Lee Child claims to do no research at all, whereas Gayle Lynds does heaps. I enjoy the research side, so I tend to do lots. I want the guns to be the right type, and to understand how they feel, so I go out and shoot a sniper rifle. I travelled extensively in the Middle East to understand the environment and culture. It was a wonderful experience. I found it difficult to gain the cooperation of Australian military. The US is more open to dealing with authors than in Australia. Two CIA agents even came to Thrillerfest in New York last year so we could ask them questions. The US sees it as good public relations. Australia is a little behind in this regard. Although I could easily find out on the Internet what weapons our soldiers use, the Army’s PR department declined to provide assistance, even though I am a member of the Media Alliance. I know they treat traditional journalists better, so maybe it’s a “first time author” thing. I hope it will be easier to approach people now I’m published.

In No Remorse, you have created memorable characters, including some villains like Sheik Khalid Yubani. Did you have anyone in mind when you wrote this character? 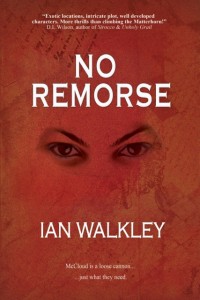 Not really. I was very conscious that there are many wealthy people who own luxury megayachts, so I was very careful checking to ensure the surname I used was not one I could find on the internet. Khalid is a very common Saudi name. There have been billionaire arms dealers with luxury yachts, whose names I’d prefer not to mention. And a dead British publisher with a yacht was reputed to be an Israeli agent. There is also a figure (now dead) associated with a defunct international bank who was alleged to have laundered funds for the CIA. So there are lots of real life personalities we writers can borrow from, but it is important that we generate fictional characters with their own unique personalities, having no resemblance to anyone living or dead (hopefully that will pass legal scrutiny).

Without giving any plot away, can you give us some background on Tally, the woman Lee McCloud has to work with?
Tally is a genius computer specialist with an eidetic memory. McCloud has a past problem with women, and feels that Tally belongs in an office, not out in the field where it’s dangerous. Tally also has a haunted past, which sets up for some good conflict, and some fun in the relationship. Remember the Moonlighting TV series, the movies Mr & Mrs Smith, and Romancing the Stone? They were my inspiration for this relationship. In the end there’s so much action happening I’m not sure I got as much into this as I could have. But I wanted to keep the plot real, and not manipulate the characters just for the fun of it. I also wanted Tally to be a strong woman, not necessarily a straightforward, stereotype. So she has her own unique traits and point of view that make her as much a protagonist as McCloud.

Ian, why did you choose to write a thriller, and especially one that has a main character with a military background? Have you served in the military?
Sadly, I haven’t served. Age 18, I applied and was recommended for the Air Force Academy but unfortunately the medical checks picked up a slight hearing loss I didn’t even know I had. I had my heart set on being a pilot, and no plan B. In some ways, writing novels is my plan B.
As a kid, I was quite an advanced reader for my age, and I loved Wilbur Smith, Alistair MacLean and Robert Ludlum. In my business career, I travelled a great deal, and frequently would buy a novel at the airport bookstore while waiting for the flight. I always dreamed about writing a “Wild Justice” or “Bourne Identity” type novel. These are global thrillers with exotic locations, international conspiracies, big stakes, larger than life characters, weapons and sex. James Bond/Jason Bourne loners against the powerful bad guys. These days it’s a Jack Reacher. My character Lee McCloud is one of these guys, with his own peculiar quirks and weaknesses. I hope the readers like him.

What made you decide to go the self-publishing route with No Remorse?
I had interest from UK and German publishers, but I submitted my manuscript too early in Australia and the US and was rejected by agents and publishers. Once I had worked with a professional editor I was ready to publish, but with the turbulence in the publishing industry I felt that resubmitting the manuscript would take another year and wasn’t prepared to wait. These days self-publishing is a realistic option. Many existing authors are self-pubbing their backlists as ebooks. Barry Eisler just did a deal to self-publish his latest novel, The Detachment, through Amazon Kindle, rejecting a $500,000 advance from St Martins Press to take the higher royalties offered by Amazon.
The other favourable factor is the ebook phenomenon. There are more than seventy million readers in the US alone who own iPads and Kindles or the next generation of tablets that can hold hundreds of books. E-books are cheaper for book lovers, and better for the environment. The maths stacks up. Like it or not, the future is e-books. Traditional bookstores are examining ways of selling e-books now—for them it is about survival.

What is your next challenge?
Testing the willingness by book reviewers in the traditional media to review self-published books. I think if a self-published author surrounds him or herself with professionals to edit, design the cover and promote the book, then these days it should be possible to gain the attention of book reviewers. I’m looking at ways to help other writers self-publish. And having the book available for sale is great motivation for me to complete my second novel, Bait, a crime thriller set in Brisbane, which will be released in April 2012.

Thank you for sharing with us, Ian, and best wishes for a very successful career as a thriller writer.

No Remorse is available as an ebook from Amazon, and Smashwords and will be available in print in early 2012. Check out the promotional trailer to catch a taste of No Remorse.