It was one day after Valentine’s Day, but my friend Louise Cusack‘s life was full of rose-tinged thoughts when her fantasy romance trilogy was epublished by Momentum Books on 15 February. Although the books had been previously print published in Australia, epublishing meant they were now available internationally.

Epublishing is a wonderful avenue for Australian authors to get their books out into the world. My books have Australian settings, which can make them difficult to sell overseas, and particularly into the USA, but with the growing trend towards readers purchasing ebooks it means my stories can now reach a greater audience and show readers from other countries aspects of Australia, and particularly Queensland, they won’t find in most travel brochures. For example, the amazing Amphitheatre at Carnarvon Gorge in Central Queensland is a wonderful example of nature’s force and I knew I had to use it when writing Dangerous Deception. The opening to the Amphitheatre is high up on a cliff face and can only be reached by climbing a series of ladders. 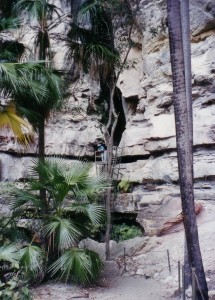 When you get to the entrance of the tunnel (which is formed by an enormous slab of rock splitting apart and creating an opening), you then have to traverse about 40 metres of uneven rock as well as concrete steps made by the Park Rangers. This photo was taken from almost inside the Amphitheatre looking back to the entrance in the cliff face. 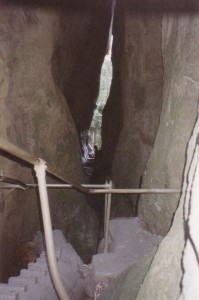 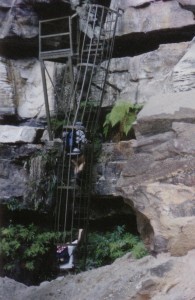 When you step inside the Amphitheatre, it’s like walking into a massive cathedral. You gaze up the vaulting slabs of rock to the tiny opening at the top where sunlight enters. The floor is grey dirt, and amazingly ferns grow in abundance, perhaps watered by rain seeping through fissures in the rock. They certainly wouldn’t get much rain through the small top opening.

When we were there a young couple joined us, and the woman took out a flute and began playing. Magic. It was the only word to describe it. Pure notes lingering then rising to the tiny patch of sky above. The acoustics are so good they have had choirs perform there for the fabulous resonance. 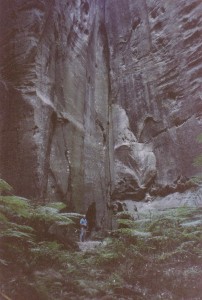 Aboriginal rock paintings adorn the cliff walls further into the gorge, and it’s easy to visualise them living here and enjoying the abundant wildlife. With a creek traversing the length of the gorge, there is ample water and lush grasses to attract wallabies, goannas and birds.

Unfortunately, feral pigs have also made the gorge their home, and their habit of rooting up plants for food has led to some destruction of the creek banks. The Park Rangers try to keep their numbers under control, but eliminating them entirely would be almost impossible.

I couldn’t believe how long it’s been since I last blogged! I thought that once I returned from the McGregor Summer School I would have a few winding-down days, then jump back into writing and organising WriteFest, the Bundaberg writers festival. But no, that crazy Chaos Fairy (my friends call her the Curtis Chaos Fairy) swatted my darling daughter-in-law, Cheryse Durrant, and she ended up with a broken leg (Cheryse, not the Fairy, darn it). Luckily we have a car that Cheryse can manoeuvre herself into the passenger seat with her leg in the knee-to-ankle brace, because trips to the physio and doctor would have been impossible in her smaller car.

Now I’m getting back to editing Grievous Harm, the story that features one of the minor characters in Fatal Flaw. GH is darker than FF, and covers a topic that sends chills down the backs of parents. It’s a story that I found myself writing in spite of my natural aversion to the topic, but the characters demanded the story be told in a certain way and I went along because I agreed with them. Sometimes I wonder where some of these characters come from. I hope they’re not from a deeper side of my personality, because that would be too scary to live with. Ruth in Fatal Flaw is a character I was fascinated by. She had so many different facets to her, so much so that I wondered how each of us would have acted in her situation. I had a sneaking sympathy for her, and I wonder if any of my readers felt the same. I would love to hear readers’ thoughts on Ruth.